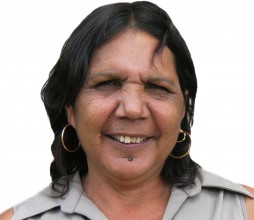 Alison Nampitjinpa Anderson was born at Haasts Bluff, in the Ulumbarru.  Ranges to the west of Alice Springs, and has lived for many years at Papunya.  Her family are custodians of fire and water Tjukurrpa sites in the Papunya region: Mikantji is among the most important of these. She is strongly committed to her law and culture, and regards the traditional beliefs of her people as her guide, in painting and in life. Her appreciation of the place of art in desert society began when she was still a child, and would watch the old masters of Papunya at work during the first days of the painting movement: men such as Old Mick Wallankarri, Paddy Carroll and Long Jack Philippus instructed her and were constant presences in her life.

We are thrilled to be showing the powerful works of Alison Anderson. We are all excited to be students learning about the Indigenous Art experience from the unique perspective of … read more →

BORN 1980 Melbourne, Australia STUDIES Creative Advertising, RMIT BACKGROUND Tran is a first generation Australian from a refugee family who, as a child, had predetermined career choices that were medicine, … read more →