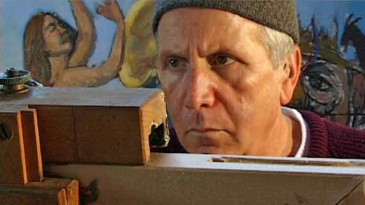 Salvatore Zofrea migrated with his family to Australia from Italy at the age of nine. At fourteen he enrolled at the Julian Ashton Art School where he studied for the next five years. He soon evolved his own highly expressionistic style whose imagery and vigour is steeped in his Calabrian background. Salvatore Zofrea feels keenly the artistic heritage of the figurative paintings of his native Italy. He often draws on literary, historical and religious sources to develop intriguing tableaux.

Zofrea’s style is characterised by a bold approach to colour and line and he is equally comfortable with large scale painting or more intimate media such as linocuts and etchings. Whether celebrating the labours of southern Italian farmers or creating cryptic narratives, Salvatore Zofrea’s work shows a lusty appetite for life.

Zofrea works in oils, woodcuts and frescos which he studied in Italy in 1985 through a Churchill Fellowship. His fresco based on Ray Lawler’s play “Summer of the Seventeenth Doll” is located in the foyer of the Sydney Opera House. Inspired by artists like Durer, and particularly Paul Gauguin, Zofrea was drawn to the medium of the woodcut and had his first solo exhibition in 1990 with the Odyssey series. His “Capricornia Suite” documents the labours of Italian migrants in the Queensland canefields while his monumental series of woodcuts “Appassionata” documents the story of his life.

Zofrea’s great life project however is to paint all one hundred and fifty images from the Book of Psalms. The Quercianella Series is based on Psalm 40 and features scenes from the seaside town of Quercianella in Tuscany.

Salvatore Zofrea’s work can be seen at the Australian National Gallery in Canberra, in major state and regional collections, and in the Vatican Museum in Rome. In 1995 the Italian Government awarded him the title of Cavaliere (Knighthood) for his contribution to art in Australia.

Subscribe to recieve the latest updates from Salvatore Zofrea