Back to Harvey Galleries

Menu
“If you never did, you should. These things are fun, and fun is good!”

The endpapers were The Cat’s coming out party. Ted spent countless hours working and reworking his Cat’s image. Over the course of a year, he created a magical personality instilled with wonder, anticipation, and mischief!

Theodor Seuss Geisel’s artistic vision emerged as the golden thread that linked every facet of his varied career, and his artwork became the platform from which he delivered forty-four children’s books, more than 400 World War II political cartoons, hundreds of advertisements, and countless editorials filled with wonderfully inventive animals, characters, and humor.

If you see an artwork marked as “SOLD OUT” this means that the artwork is sold out at the publisher. We may still have it in our inventory, so be sure to check with us!

Illustrator by day, surrealist by night, Seuss created a body of irrepressible work that redefines this American icon as an iconographic American artist. Yet, the Secret Art often shows a side of the artist that most readers, familiar with him through his classic children’s books, have never seen. This collection, created over a period of more than 60 years, encompasses the entirety of Seuss’s multi-dimensional talent. The artistic golden thread highlighted throughout this collection is apparent in each wildly imaginative and surreal Secret Art image. The Secret Art of Dr. Seuss is an inimitable collection of artworks created at night for his own personal enjoyment. These works were rarely, if ever, exhibited during his lifetime and provide a deeper glimpse into the art and life of this celebrated American Icon.

Like Norman Rockwell, Seuss personally created every rough sketch, preliminary drawing, final line drawing and finished work for each page of every project he illustrated. Despite the technical and budgetary limitations of color printing during the early and mid-twentieth century, Dr. Seuss the artist was meticulous about color selection. He created specially numbered color charts and elaborate color call-outs to precisely accomplish his vision for each book. Saturated reds and blues, for example, were carefully chosen for The Cat in the Hat to attract and maintain the visual attention of a six-year-old audience. By the time Seuss’s book career took off, sharp draftsman skills were evident in drawings. His ability to move a storyline ahead via illustrations filled with tension, movement and color became a hallmark component of his work, and the surreal images that unfolded over six decades became the catalyst for a humorous and inspired learning experience.

Theodor Seuss Geisel (a.k.a. Dr. Seuss) delighted millions worldwide as author and illustrator of some of the 20th Century’s most beloved books for children. However, the paintings and illustrations included in the Dr. Seuss Archival Works show another facet of Geisel’s artistic expressions as seen in his political cartoons, advertising illustrations, select private works and some of his more obscure books for children. Two of Seuss’s notable projects in the late 1920s and early 1930s, included a national ad campaign for Standard Oil of New Jersey, as well as Life and Judge magazine covers. Geisel’s hallmark wit and whimsy was already evident in these works, as it was in his early paintings done for select books in the 1940s and 1950s. The enduring satirical messages of Dr. Seuss’s Archival Works are a testament to his sharp creativity and his poignant comments on life throughout the 20th Century.

Seuss embarked on an ingenious project in the early 1930s as he evolved from two-dimensional artworks to three-dimensional sculptures. What was most unusual for these mixed-media sculptures was the use of real animal parts including beaks, antlers and horns from deceased Forest Park Zoo animals where Seuss’s father was superintendent. Unorthodox Collection of Taxidermy was born in a cramped New York apartment and included a menagerie of inventive creatures with names like the “Two Horned Drouberhannis,” “Andulovian Grackler,” and “Semi-Normal Green-Lidded Fawn.” Shortly after Seuss created this unique collection of artworks, Look Magazine dubbed Seuss “The World’s Most Eminent Authority on Unheard-Of Animals.” To this day, Seuss’s Unorthodox Collection of Taxidermy remains as some of the finest examples of his inventive and multi-dimensional creativity.

Artist Leo Rijn, the inaugural sculptor for the Dr. Seuss Tribute Collection, was selected to launch this project due to his prized work with some of today’s top talent in the world of film, entertainment and the visual arts (including Tim Burton, Ang Lee and Steven Spielberg). Rijn has been identified as one of today’s brightest sculpting talents because of his ability to breathe life into the written word and successfully transform two-dimensional ideas into three-dimensional works of art.

Universal Studios commissioned Leo to develop and oversee the creation of numerous maquette scale models for the Monumental Dr. Seuss Sculptures at Seuss Landing in Orlando, Florida. Leo was instrumental in the art direction for many of the sculpted characters and buildings now on display at this permanent Seuss attraction. His strikingly accurate Seuss works embody a masterful and intuitive Seussian sensibility, establishing him as a leading talent in interpretive sculpting.

Enquire about an Artwork

We are here to help! No question too big or too small! Come & visit us at one of our galleries!

See in person our extensive range of Limited Edition Dr. Seuss artworks!
From Green Eggs and Ham to The Cat in the Hat! 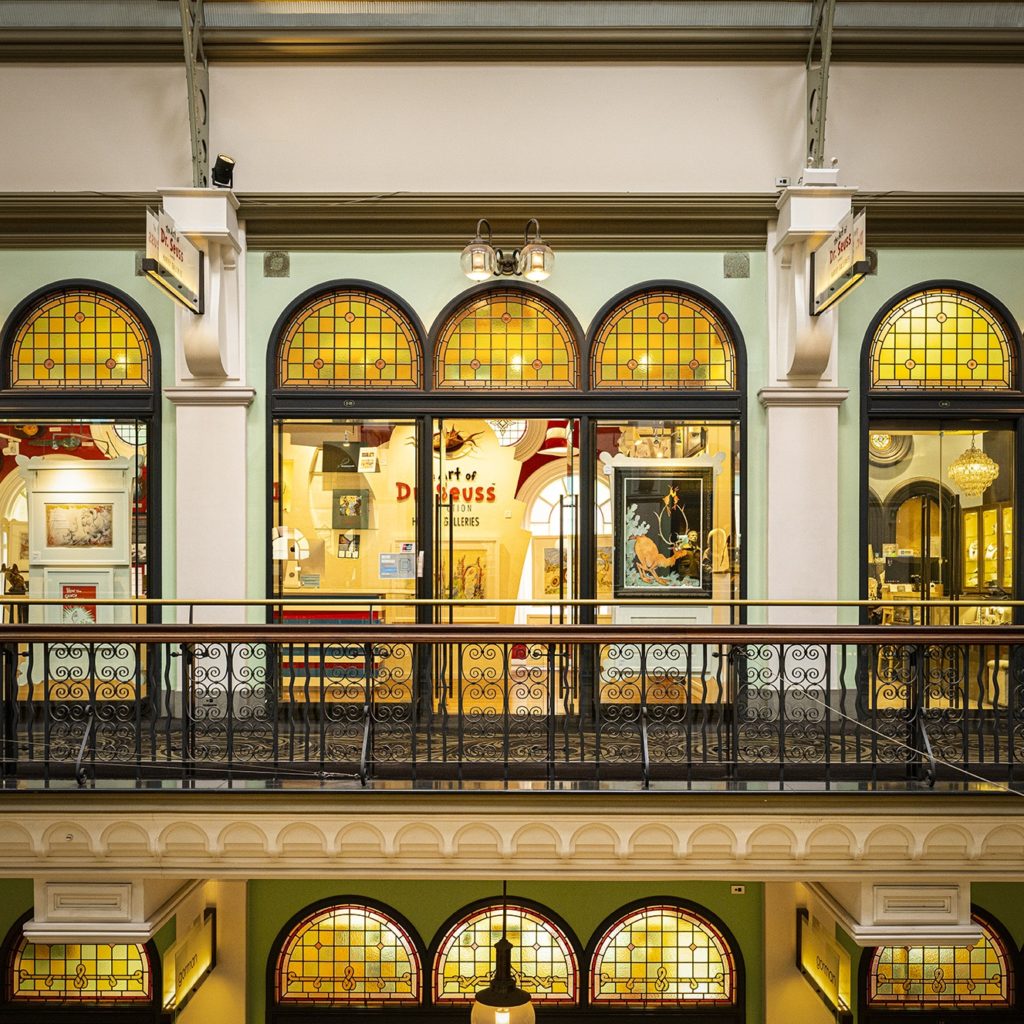 The Art of Dr. Seuss, Sydney

The Art of Dr. Seuss, Melbourne

Stay in the loop